Before DJ Cleo’s share of Nairobi’s dance-floors with Facebook, Yvonne Chaka Chaka’s Umqombothi not only moved a sector of the Kenyan society, but assumed new meanings in the process. So did Luanda and Lagos, the latter singing along their own rendition that refrained ‘Uphi umqombothi…‘ with ‘Looking for husband…”. Heavy, ne?

I enjoyed that people in Nairobi were dancing (or not) and singing (and ululating) along with/to the Ten Cities concert acts, instead of documenting with their smart-phones. Some did, and shared on Social Media in pure service to a beautiful scene (actually, I was told that I have only experienced a middle class scene, I know fokol). I dug Dj Danylo’s set, who later observed how the people took serious attention to the dance-floor, bewitched by what was supposed to be his opener set. The response to new music (and ideas) was most beautiful to experience, it was a pleasure to play music for the people of Nairobi! 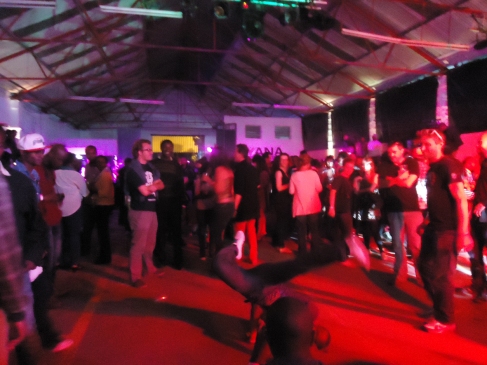 Thanks to the Goethe-Institut Nairobi for a brilliant writers’ seminar and concert. I am part of a group of writers engaging with the public sphere and urban space space through the lens of club cultures in five African cities and five European cities. Together with Sean O’Toole, we are chronicling some of Johannesburg’s club cultures from 1960 to now now (a hi hat to The Chronic).

Return right here for my next post, on this very exciting topic.

The Thath'i Cover Okestra is an evolving pan-African Okestra that investigates the meaning and importance of Kwaito (South African electronic dance genre) music’s legacy for a new generation. Through this collaborative exploration, what emerges is a "new super nostalgic African futuristic spiritual chant non-genre".